How Much Weight Should You Lift?

Choosing the right weight isn’t random. Here’s how to determine the resistance you should be using to fast-track your progress.

As a gym veteran, I frequently receive two types of questions from beginners. The question that does not relate to what protein powder they should choose focuses on a very different matter: How much weight should they be lifting on a given exercise?

It’s a perfectly good question, and there’s no simple answer. In fact, a number of variables are in play here, so let’s go through them one at a time. Doing so will allow you to customize your training program to ensure you’re using the right weight every time.

It may surprise you to learn that the answer changes depending on your goal. If you’re looking to get as strong as possible, you’ll be using a heavier weight than someone who is trying to get as big as possible. And to improve muscular endurance, you’ll use an even lighter weight.

Let’s take a closer look at the three training protocols.

Focusing on strength requires doing multijoint movements like bench presses, squats, and deadlifts. Here, more than a single set of joints are working at once, such as the shoulder and elbow joints working together on a bench press. This multijoint action recruits more total muscle mass, thus allowing you to lift heavier weights.

The actual muscle fibers being recruited during very heavy sets are called fast-twitch muscle fibers; they’re the ones that are more prone to growing bigger and stronger in response to resistance training as well. However, they run out of steam fairly quickly, which is why you can’t lift a very heavy weight very many times.

While those who train for maximizing strength do in fact get big, their methods may not be the most effective for maximally increasing muscle size (hypertrophy). Bodybuilders and gym rats who aim to increase the size of their muscles take a slightly different approach to determining how much weight they use. Here, choosing a weight in which they can do 8-12 reps has been shown to maximize muscle gains.

But there are a couple of caveats with that statement, so let’s address those first. 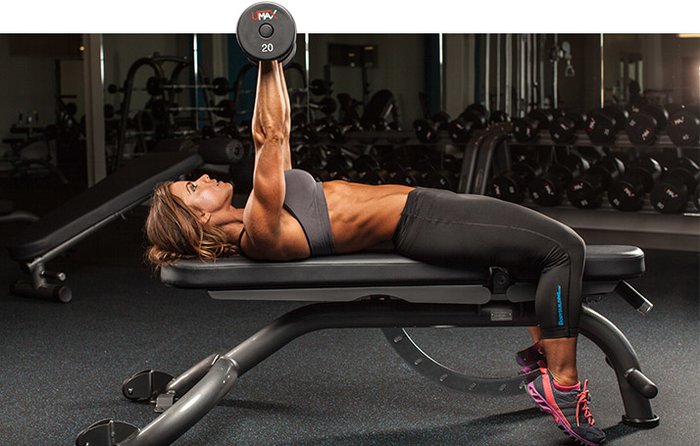 The sweet spot lies in choosing a weight in which you can just do 8-12 reps on your own.

Not everyone trains to get as big or as strong as possible. You can also train at a lower level of intensity—that is, the weight you use relative to what you can maximally lift for one rep. This builds up the mechanisms within the muscle that make it more aerobically efficient, without increasing the size of the muscle. Hence, the muscle can do lots of reps for long periods of time without fatiguing. The classic marathon runner’s musculature is designed to take him or her the distance.

Focusing on muscle endurance means choosing very light weights that can be done for 15-20 reps or more. The weight stimulus just isn’t strong enough to maximize size or strength. That’s because the muscles are engaging the slow-twitch rather than the fast-twitch fibers. These fibers are designed to be used for longer activities and don’t typically grow significantly in size compared to the fast-twitch variety.